Skip to content scroll to discover more back to top

What may the future of the sharing economy be and how may this affect the corporate sector?

The sharing economy encompasses several business concepts for sharing equipment, lodging, food, labor, and transportation. Since the 1990s, numerous economic models have risen to incorporate shared use of resources, also referred to as the peer-to-peer (P2P) economy (Shaheen et al., 2017). In 2014, the five sectors of the sharing economy (equipment, automobiles, books, DVDs, and housing) produced $15 billion in worldwide income, which is predicted to increase to $335 billion by 2025 (PwC, 2014).

Social networking platforms and GPS-enabled mobile technology have encouraged shared mobility, a developing sector of the sharing economy in which strangers share the use of a car or mode of transportation. In order to avoid the drawbacks of personal ownership (expense, environmental impact), an increasing number of consumers decide on shared products and services (Botsman & Rogers, 2010).

As a consequence of consumer demand, new business models emerged in the late twentieth century to fit the shift in consumption habits. In an effort to dominate the ridesharing business, BlaBlaCar, one of the most promising French startups, purchased its German competitor Carpooling.com and Hungarian competition AutoHop (Techcrunch, 2015). The number of registered vehicle-sharing clients in Germany has risen dramatically in recent years, from more than one million in 2015 to 2.87 million in 2021 (Statista, 2022). According to a 2016 research, the availability of free-floating carsharing might lead to a reduction in car ownership, which is influenced by the frequency of usage and the service’s accessibility (Giesel & Nobis, 2016).

By 2050, the United Nations forecasts that up to 2.5 billion additional individuals would be living in cities. Some experts believe that the quickly growing mobility-as-a-service industry, with representatives such as BlaBlaCar and Uber, will assist carsharing and ridesharing startups to undermine big manufacturers’ market share (Greenbiz, 2015). Nonetheless, big companies such as Mercedes-Benz and BMW have recognized the opportunity that the sharing economy represents and they are already conceiving and implementing solutions that anticipate and satisfy the demands of consumers.

When interviewed on the car-sharing economy, Arwed Niestroj, CEO of Mercedes-Benz Research and Development North America said he does not see it as a threat to the company as it is not a viable replacement for personal automobiles (Greenbiz, 2015). However, Daimler, Mercedes’ parent company is already taking part in the sharing economy field. One of the acquired companies is Moovel, a German company that provides city-friendly services such as carpooling, bike pooling, and on-demand trips. Daimler has also bought a number of companies in the field, including myTaxi, a German cab booking app, and RideScout, a transportation planning aggregator based in the United States (Gigaom, 2014). Mercedes-Benz’s strategy for the future is certainly diversification. In addition to taking part in sharing economy, the company is also working on developments in the field of autonomous driving.

In 2018, BMW announced their leasing program as an innovative way to assist customers who want to participate in the sharing economy – providing a perfect option for customers who want to supplement their income by driving for ride-sharing companies or renting their car while it is not in use. The program launched in Washington, Oregon, and California, giving users the option of sharing their leased BMW vehicle with peers or working for a ride-sharing firm (BMW, 2018). BMW and Sixt, a premium rental vehicle firm, teamed together in Berlin in 2011 to launch DriveNow, a car-sharing service (Medium, 2017). They understand that individuals in urban areas do not want to possess vehicles, and are, therefore, seeking to provide more value-added services, such as transportation, parking solutions while you borrow the automobile, charging services, and insurance. Starting DriveNow concedes the company to sell one BMW thousand times rather than a thousand BMWs. DriveNow is especially popular in Berlin, where over 1000 automobiles are driven five to six times every day (Reinvent, 2016).

According to McKinsey’s 2017 consumer study, shared mobility will continue to expand. Among those who now use ride-hailing services other than taxis, 63 percent plan to increase their usage “substantially” in the next two years, and almost 70 percent want to increase their use of car sharing. A multitude of scenarios are feasible; nonetheless, client preferences, law, and technology will be the primary factors in shaping industry changes. Due to shared mobility, nearly one-third of the predicted rise in car sales from urbanization and macroeconomic development will most likely not occur by 2030. The automotive industry, on the other hand, will gain from the high replacement frequency of shared cars due to their regular use.

In terms of other sectors, Patagonia is the industry leader in a sustainable fashion and it has been actively participating as a sustainability leader by employing shared economy strategies. Its activities are well recognized for promoting the emergence of alternative waste management solutions such as repair, as well as the purchase of second-hand and vintage clothing items and gear through its Worn Wear website. Following the incorporation of the sharing economy strategies into its business model, more environmentally friendly initiatives such as fundamentally innovative and counterintuitive to the mainstream fashion company – mending services for all of its items – are implemented. Patagonia’s collaboration with eBay, Yerdle, and the Common Threads Initiative aim to minimize consumption and resource depletion by allowing customers to purchase items that the company has previously manufactured (Forbes, 2013). It also offers an upcycled collection called ReCrafted that showcases things made from recycled waste, demonstrating that clothes can be converted into something new and shared again even when it is beyond repair.

While global consumption of apparel and shoes is anticipated to reach 102 million tons by 2030 (Global Fashion Agenda, 2019), the fashion industry is being redefined to include anything from used things to new products. With changing shoppers’ preferences, Patagonia teamed up with Yerdle, allowing its customers to return old clothes for store credit. Yerdle then fixes and refurbishes such items so that apparel company may offer them under its own labels as refurbished,  and avoid dealing with replete with warranties, customer service, and return policies (GreenBiz, 2018).

According to Globaldata (Thredup, 2021), the fastest-growing retail categories in the next ten years will be renting, resale, and subscription. However, by 2030, the average individual is estimated to spend 18% of their clothing budget on resale, while renting would account for just under 1%. However, younger generations will adapt more quickly, and renting will become a larger part of the shopper’s choice.

According to the CGS report, 72 percent of customers are prepared to pay $50 or more per month to rent three goods. Is this to concern the $300 billion clothing business? On the contrary, the emergence of clothes subscription and rental services simply helps to increase consumers’ access to products they may not have purchased otherwise (CGS, 2019). Introducing innovative models in their business will help corporates expand to incorporate different target audiences.

As previous examples of clothes sharing and mobility sharing industries illustrate, corporates are just starting to recognize the consumer trends and apply shared economy business models throughout their operations. This trend is to continue, as by promoting notions such as access over ownership, co-creation of services and commodities, and transforming consumers into users, owners, producers, and decision-makers, corporations find and seize new economic opportunities as well as new clientele with distinct social standards. The sharing economy business models disrupt the conventional consumer-producer relationship by transforming customers into the individuals who actually deliver a service or a product. 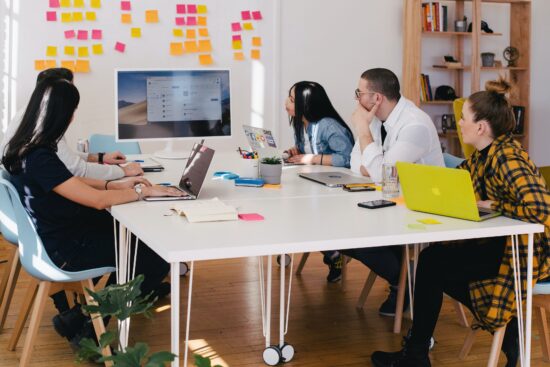 Sustainable transformation: How to turn challenges into business opportunities

This site uses Akismet to reduce spam. Learn how your comment data is processed.